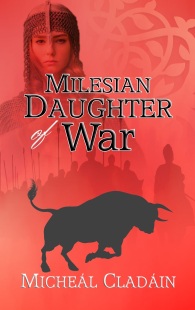 As any author would tell you, the hardest part of writing a good story is building good characters: characters a reader can invest in, characters who are not one dimensional. It is so easy to make a villain pure evil and a hero angelic, but would a reader buy into them.

While on a writer’s retreat with bestselling author Conor Kostick recently, Conor asked me for three adjectives that describe Queen Medb, the character I am currently writing. Not a problem: wicked, violent, and promiscuous. Easy.

There is a statue of Medb in Dublin city, which I feel, sums her up. She holds a boar spear in one hand, the severed head of Don Cuailnge (The Brown Bull of Cooley) in the other, and she is naked. Wickedness, violence, and promiscuity represented in a giant bronze effigy. For me, the effigy has a scent of pure evil about it. Each time I see it, I shiver. But was she really that one-dimensional?

Was she wicked? In hindsight, I think wicked was not the best adjective. Capricious better fits Ireland’s most famous ancient antiheroine.

My research puts in mind an ancient deity incarnated into the body of a queen. She had an impish streak, not unlike a Pan or Bacchus. Was she evil? I don’t think so. I think she was a mother and a wife who, through circumstance, did what she had to, to succeed and survive. It is important to keep in mind the type of society in which she lived. Although the Irish tribes are famous for their metalworking, their songs, and their storytelling, there was a much darker side. They kept the heads of their battle victims as trophies, they performed human sacrifices, they constantly raided settlements to steal a few cows and rape a few women. Was she just a woman of the times?

Again, it is not that simple. She reacted with extreme prejudice when feeling slighted.

Which leads nicely onto the second adjective. Violence. Was Medb both capricious and violent? Yes. One example: she demanded the execution of the Galeoin during the march to Cooley because their warriors were better than her own. There is no hinting at violence in that action. It is in your face blood and guts. The army was made up of seventeen tribes, each with three thousand warriors, so she demanded the deaths of three thousand men and women because they were well trained!

What about her love life? Medb had a string of lovers while she was married to Ailill. The most famous being Fergus Mac Roi, who Ailill had killed when he discovered them bathing together in a lake. With Medb’s early life, she might be forgiven for the odd dalliance. Sold into the sexual slavery of Conor Mac Nessa when little more than a child, it is easy to see where she might have lost her way a little in later life. However, I think there was more to it. I don’t think it was an accident that she had a dalliance with Fergus, a warrior exiled from Ulster, who hated Conor Mac Nessa. I think Medb was a woman who used her body to get what she needed in life.

So how is it possible to build a multi-dimensional character from that base? Of course, it is possible, but it is not easy. My journey is well on the way to completion, and the more I add flesh to her bones, the less one-dimensional she becomes.

By August 31st, she will be a mother, a lover, a wife, and a queen. However, she will also be wicked, violent, and promiscuous.

This site uses Akismet to reduce spam. Learn how your comment data is processed.